Where to Enjoy Sydney’s Music Scene 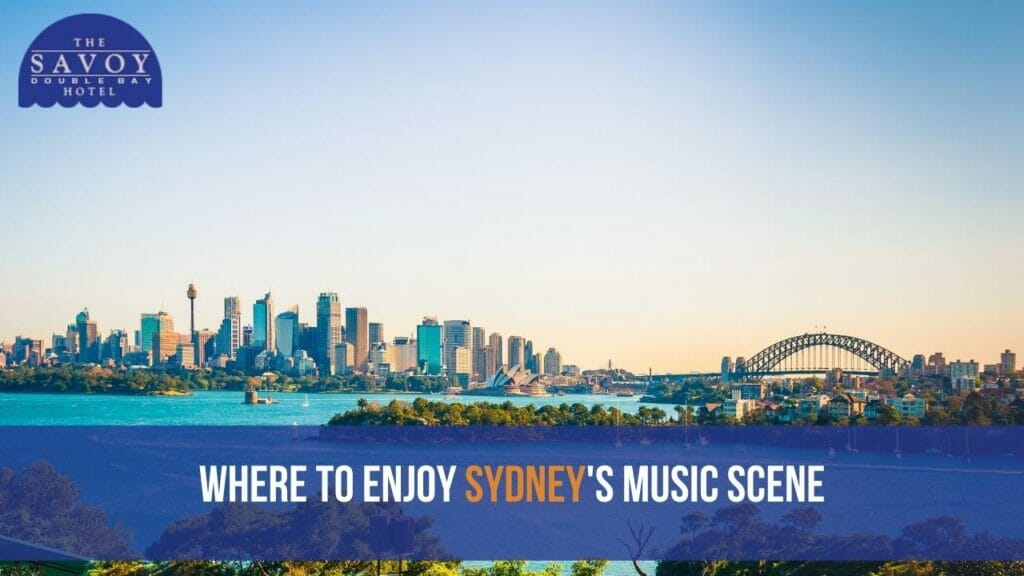 Life in Sydney can be fun and lively. There are plenty of spots at the famous beaches to sunbathe in, or are gorgeous areas to shop and dine in, supported by reliable, comfortable, renowned Sydney accommodation.

Sydney’s nightlife and music scene is also a big hit. If sipping on a cold beer while listening to live music sounds amazing, Sydney can definitely offer a lot. Despite the pandemic, the local live music and entertainment scene in Sydney still stands strong.

With its music scene, Sydney is definitely not a drab and boring city. So, the team at the Savoy Hotel, Double Bay, Sydney, have scoured the city to bring you 19 of the best music venues that this vibrant metropolis can offer:

The Vanguard’s purpose is quite clear to all who visit it. Its purpose being to give all of its patrons a great show and an experience to remember.

The Vanguard offers a full-service bar and good food alongside their entertaining live performances. It is located on King St. in Newton, about 17 minutes from Double Bay and is quite familiar with both international and local music. In Double Bay, tourists can find an accessible Sydney accommodation after a full night of partying.

The Metro Theatre has been Sydney’s leading independent rock venue for years and has hosted many of the most memorable live gigs that Sydney has known. It is a landmark venue for both international and local acts, being a pivotal breakthrough venue for bands as they break on to the scene.

Roundhouse is a fully equipped venue for live music. They host theatre and comedy nights, huge dance parties, and sold-out performances and shows. They have been a favourite of numerous local gig enthusiasts for over five decades and s only a 12 minute car ride from The Savoy Hotel, in Double Bay.

Manning Bar is a bar within the campus of The University of Sydney, with an aim of putting on top-tier performances. Because Sydney universities are great at throwing parties, this place attracts lots of talented performers. Gotye, Ratatat, and Violent Soho are but a few of the great talented they have hosted thus far.

Venue 505 is in the ballroom of the original Newtown School of the Arts. It mainly focuses on contemporary music, funk, and jazz. Still, many international genres have shown up on their stage and delivered fun performances.

Lazybones Lounge is definitely not lazy as they put on live entertainment seven nights a week. Aside from top-notch live music, it also has a dim atmosphere and a great ambience. This is one of the funkiest hot spots that Sydney music lovers love to visit.

The Oxford Art Factory (also known as OAF) is one of the cornerstones of Sydney’s live music scene and has been hosting and showcasing local and international talents on their stages for years now. The Oxford Art Factory is known for their world-class shows that would not disappoint. OAF is definitely a favourite spot among gig-goers.

Crowbar is a live music dive bar that showcases a whole lot of hard core, punk, and metal. They host some of the best bands and performers around, may they be local or international. If a night with great loud music and ice-cold beer sounds amazing, Crowbar is the place to visit.

The Bank Hotel is one of the best bars to watch live music around Sydney. They are dedicated to growing and fanning the flames on the area’s bustling music scene. The Bank Hotel is located near the Newtown train station and only a 15 minute taxi from The Savoy Hotel, Double Bay.

Hustle and Flow is a place with lively jam nights with a huge array of DJs and bands for their live entertainment. It also offers a wide variety of drinks (cocktails, craft beer, etc.) and generous plates of food. It is a great place to hang out in, especially after quite a hectic day or week.

Frankie’s Pizza is one of the greatest music venues in Sydney. From an outsider’s perspective, this venue might seem like a typical New York style pizza shop. Down from the aesthetic to the vibe, it might seem like a regular pizzeria to most; however, there is more to it – Frankie’s Pizza hosts daily shows and plays rock, metal, punk, and alt music. Go and check it out.

The Agincourt Hotel offers a public bar with sports, food, and drinks in its higher levels. But for gig-goers, the underground is the place to go. As an underground bar and nightclub, it hosts local live music and entertainment every weekend (or on Thursdays). All kinds of rock are performed on its stages.

The Camelot Lounge is an artist-curated space that gives off a cordial and easy-going atmosphere. It has hosted several performances transcending genre for over a decade now. It is one of Sydney’s boutique music venues that host jazz, blues, folk, cabaret, and soul performances. It has witnessed local, national, and international acts on its stages.

Down the basement of The Chippo Hotel in Chippendale lies an exciting music venue every weekend. It is a music venue that caters to no specific genre. Rock or metal, house or techno, any genre can just pop into the soundwaves here. It is also just 13 minutes or so away from Double Bay.

The Sydney Opera House is the most iconic live music venue in Sydney. It is best recognised by its distinct sails, eye-catching architecture, and legendary performances.

Aside from opera, theatre, and other classical music acts and performances, it also hosts contemporary artists. A visit to the Sydney Opera House to watch a performance would definitely be memorable.

The Enmore Theatre is located in the heart of Sydney’s performance and live-music centre, Newtown. It is the oldest live music venue in the state at 110 years old. The Enmore Theatre has attracted many famous bands and hosts high-quality performers.

The International Convention Centre is one of the most modernised entertainment locations you can visit. It is the newest and most technically advanced exhibition centre after all. It hosts a wide variety of entertainment events and concerts in one of their theatres. The International Convention Centre is strategically located on the waters of Darling Harbour.

The ANZ Stadium is known for their sporting events, but they have thrown a lot of wild parties before. The stadium has showcased AC/DC, the Foo Fighters, and Guns N’ Roses on their stage before. ANZ Stadium has also hosted huge benefit concerts for bushfire relief that have attracted thousands of attendees.

Need clean and comfortable Sydney accommodation? Look no further than The Savoy Hotel.

The Savoy Hotel, Double Bay, is the best small value hotel you could find in the quiet but bustling side of Sydney, offering safe and gorgeous Double Bay accommodation in Sydney’s Eastern Suburbs. Our Sydney accommodation is just about 4.5km from the city centre and can be easily reached by public and private transport.

Call us on 02 9326 1411 for enquiries, or you can click here to book directly to view our available rooms on your chosen dates. Alternatively, please feel free to email us at info@savoyhotel.com.au or click here to send us an online message and we will return contact with you as soon as possible.