Sydney Events That Were Rescheduled to 2021 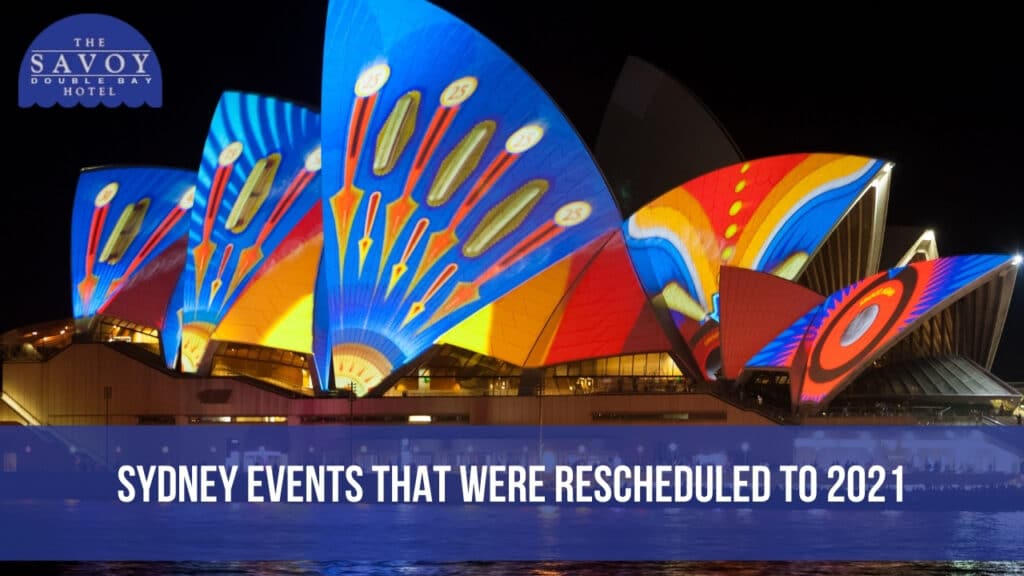 Do take note of these changes announced thus far.

Many people who visit Sydney do so to enjoy much of the culture that surrounds the locale. In and around Sydney, you’d find almost a special event every week. There are theatre performances, musical events, and local acts almost all year round.

A large portion of these events, however, may be cancelled or postponed due to the Covid-19 pandemic. This is because the very nature of festivals and performances allows for close contact with other people and can be a potential virus spreader.

Not to worry, though, as many Australian acts are seeing the path to recovery. Fingers crossed, these rescheduled performances will soon provide the culture, and entertainment everyone sorely needs right now.

For your information, here are some events that have been re-scheduled to a later date. You might want to inform your Sydney accommodation soon for changes to your booking.

Sydney is a major convention for indie rock bands, especially homegrown talents. Indie band Holy Holy was set to get their Sydney leg of their upcoming tour going this 22 and 23 January.

Holy Holy is only one of many acts that need to adjust in these trying times. On the 15th of January, they rescheduled their performance to 19 to 20 March. You might want to book your Sydney accommodation in advance as March is a busy time for the city, especially in the Central Business District. You’ll have more things to do as global artists and events such as the Moonlight Cinema, Australian Track and Field Champions and the like happen around this time of the year,

In December 2020, they posted that they’re rescheduling the QLD and NSW dates to later this year to work with the public health order. Multi-stage mass music gathering events are not yet possible in their original format.

The Newcastle leg of the event will now be on 6 November 2021. This That Festival is an enjoyable party of music, art, and people. It works with many original acts to offer a unique festival that visitors will surely love.

Finding a good accommodation in Sydney early on will surely be a boon if you go forward with the event.

Sydney is home to many folk acts and indie darlings, especially those who come from Aboriginal backgrounds. Thelma Plum is a homegrown talent and is among the many who had to reschedule her Sydney tour.

Plum was originally scheduled for a May to July headline tour in 2020. She eventually moved it to November and December last year, until she had to move it again to May, June, and July 2021.

She also included a few additions to her tour, together with some changes. For starters, she will be playing at Enmore Theatre this time. The two separate Sydney shows will now combine into one mega display.

The folk singer will be singing all around New South Wales too. She’s supposed to be in Newtown, Kingscliff, and Newcastle.

Many visitors book Sydney accommodation to enjoy local indie music events. Chief among those acts is the Spring Loaded Festival, which unfortunately had to postpone last year’s event.

Spring Loaded Festival is a folk music and indie rock event for the Aussie ears. Their line-up is unique, from Grinspoon to alt rock band Jebediah and more. They originally planned to perform at the Royal Randwick.

The festival will still have all its acts but will now take place on 8th May in Sydney. The event tends to be one of the bigger events in Sydney for local acts, so it’s something you shouldn’t miss.

Another great musical event that needed to reschedule was the Shelf Life Tour of Northeast Party House. The electronic band is one of Australia’s more active acts, and it’s always known for the blast in their tours.

The tour should’ve taken place around August to September 2020. They had to move the tour to November and December, but went on to reschedule it again.

As of date, Northeast Party House has moved their schedules to April and May 2021. Being an electronic band, the close party atmosphere in their music festivals is crucial to their tour. And, the strict health protocols could be difficult, if not impossible, to implement.

One of the events with a bigger pull is The Sydney Fringe Festival. The festival is among the largest indie arts festival in New South Wales.

The Sydney Fringe Festival offers as many as 450 events, many presented in over 70 venues across Greater Sydney each year. Due to the pandemic, the venue cancelled for 2020 but is now ready to go on in 2021.

So far, the tentative date for the festival is September 2021. If you’re planning to see the festival, you’d need to have a good place to stay to maximise all of the venues that the festival will use. An accessible accommodation in Sydney could be key to a more enjoyable Sydney Fringe Festival experience.

Vivid Sydney is one of the city’s biggest and brightest events. It is one of the best celebrations of lights, arts, music, and special installations for the city. Vivid Sydney was scheduled from 22 May to 13 June 2020 but had to cancelled for the first time.

This year, the event is ready to come back with a rescheduled event, starting around August 2021. Vivid can light up Sydney again, which shadows springing into colour and offers a magical world in the future.

Book with Savoy Hotel for Your Next Sydney Visit

Are you ready to see Sydney again? Accommodations in Sydney allow for easy access to a load of events that are available all year round. Now that the pandemic is seemingly waning, we’re ready to see the beautiful lights of joy and recovery.

If you’re still looking for a place to stay at the heart of Sydney, Savoy Hotel is the right place for you. Talk to us today and find out why we are the oasis at the heart of a humming Australian landscape.