Everything you need to know when visiting Sydney for Vivid 2021 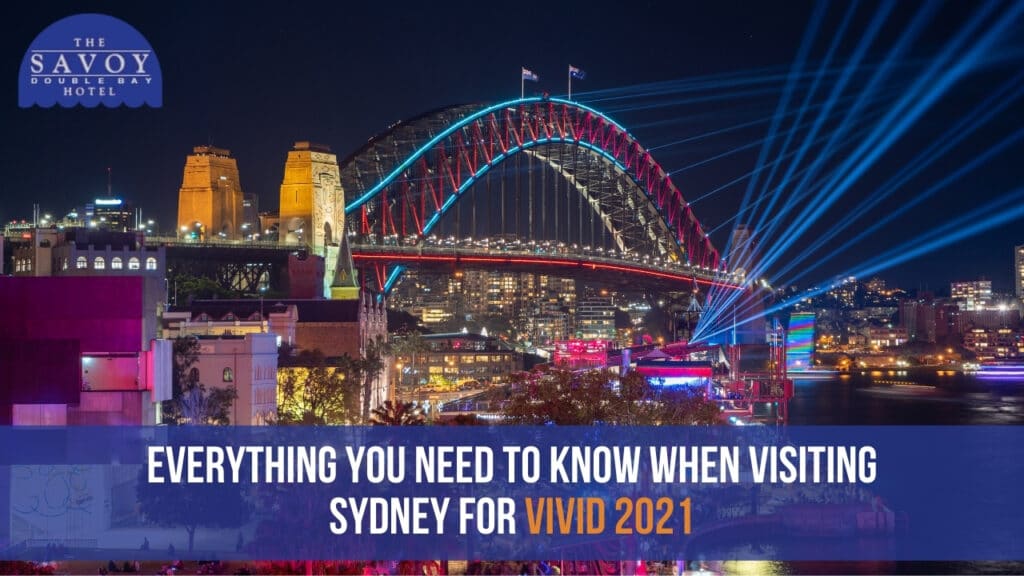 Vivid 2021 is a festival that transforms the city of Sydney overnight into a light spectacle. Broken into three sections, Vivid will have Vivid Lights, Vivid Music and Vivid Ideas. Most prominently to be seen will be Vivid Lights featuring laser light shows, 3D projections and large-scale illuminations.

Gill Minervini, Festival Director, spoke on this year’s event saying “This year, Vivid Sydney will deliver fresh experiences for our festival-goers to enjoy. For the first time ever, the waters of Cockle Bay in Darling Harbour will come alive as a floating Light Walk incorporating a large-scale artwork called Ephemeral from Sydney-based design studio Atelier Sisu.”

Expanding more on the main attractions Mr Minervini added, “The façade of Customs House, one of the city’s most iconic heritage buildings, will be brought to life with VORAX – an epic 3D tale of a mischievous thief’s rise to greatness from Hong Kong’s Treacle Media. And in The Rocks, artist Brad Robson and Esem Projects provide a fascinating insight into the journey of creating Brad’s dynamic portraits through Point of View.”

Although scheduled for 2020, due to Covid-19, the festival was moved forward to this year.

Where is Vivid located?

All over the city! But first, Vivid 2021 will kick start by lighting up the Sydney Opera House. Interactive light displays will be seen through the ‘Vivid Light Walk’ which goes through The Rocks, Circular Quay and Royal Botanic Gardens.

Other iconic Sydney structures will also be lit up such as Sydney Harbour Bridge, Camans Cottage, and the Sydney’s Customs House. Over by The Rocks, there will be light installations in the Museum of Contemporary Art.

It is also possible to get onto one of the harbour ferries or cruise vessels which will tour around the numerous spectacles and allow you to catch some great photos while relaxing.

How much is Vivid?

Vivid 2021 is largely a free event. All the light displays which roam the city during the night are free to watch. Although a few events will require a paid ticket for Vivid Music shows, Vivid Ideas events and Vivid Sydney at Taronga Zoo.

What are the key events?

Excitingly, there will be a mesmerising exhibit across on the water between Darling Harbour and Cockle Bay called ‘Ephemeral’. This display will project bubbles over the water and walkway with beautiful cosmic colours.

At Sydney’s Customs House, there will be a 3D projected tale about a mischievous thief’s adventures, made by Hong Kong’s Treacle Media. The event is named ‘VORAX’.

According to the official Vivid Sydney website, Destinations are working with NSW Health to make the event COVID-safe. As the event date comes closer, more details will be released, based on current restrictions and regulations.

The tourism minister, Stuart Ayres, spoke on the Covid plans saying, “The most important thing to recognise is that Vivid will be safe.” Mr Ayres also added, “We will have our COVID safety plans operating in all our indoor venues and the light walk that is so famous and attracts so many people to those Sydney landmarks and icons, will also have their own safety management plan.”

For more information about the COVID safe plan for Vivid, check out the website online.

Details for your Sydney Trip

How do you get around in Sydney?

Sydney has a Metro Monorail which loops around the shopping district and Darling Harbour. There are also plenty of buses and ferries around to get you from A to B!

The NSW minister of tourism, Adam Marshall, says, “There are thousands of new services that are put on just for Vivid to make it as easy as possible to get around.”

If you plan on taking a lot of public transport, you should pick up an Opal Card at any newsagents; it can also be topped up there. The Opal Card can be used around Sydney, the Blue Mountains, Central Coast, the Hunter, and Illawarra.

The TripView app is also a must-have tool to traverse the city. It will show you public transport routes and timetables which will make your trip stress-free! The Vivid Sydney app can also show the best routes and schedules for transport.

How about eating out in Sydney?

Sydney is known for its mouth-watering diverse food and top-rated restaurants for all budgets! When it comes to finding places to eat, you will not be lacking in options.

Along the Vivid Light Walk, there will be several food trucks and cafes available, so you will not have to leave the event to stop for a bite to eat.

There also will be many food trucks located around Circular Quay and Darling Harbour. Most excitingly one of the newest food presidents at Darling Square will have an exciting pop-up called ‘Darling Square’s Backlight Dessert Lab’. This pop-up will have bubble tea with glow in the dark boba along with a gelato cake with a layer of neon strawberries!

Where to find accommodation?

When it comes to booking accommodation for Vivid 2021, look no further than The Savoy Hotel!

Not only is the Savoy Hotel affordable with stunning rooms but it is also only 4.5KM away from Sydney city centre with convenient taxis, buses and harbour ferries at your service. Being situated at Double Bay, the hotel is surrounded by the best coffee shops, boutiques and wine bars.

For the best travelling experience while visiting the festival, you can trust The Savoy Hotel. Call us or book online to get the best rates for accommodation for Vivid 2021!