Everything You Need to Know About Double Bay 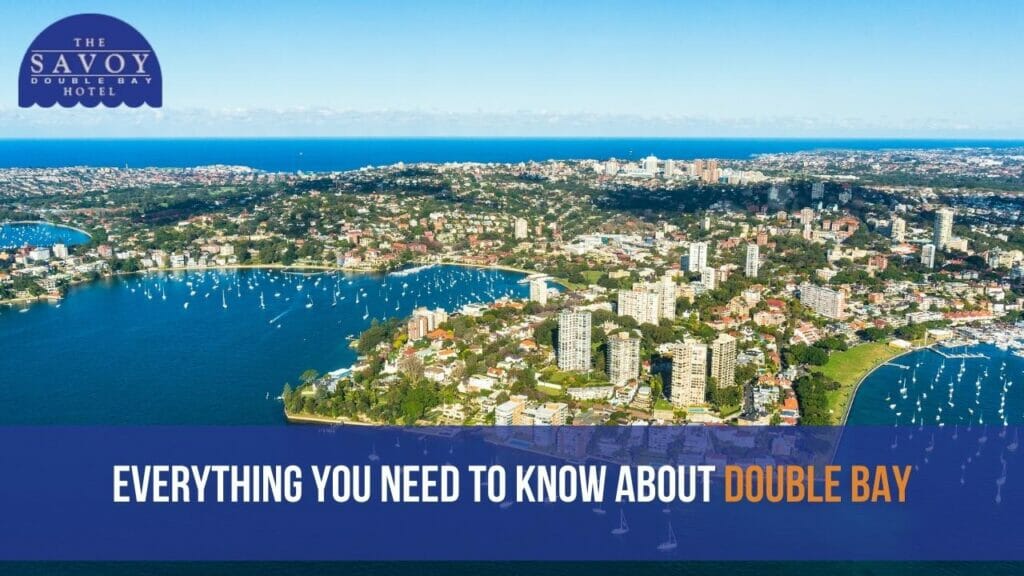 A little background before you Arrive and Explore

Double Bay is located 4 km east of the Sydney CBD. It is quite an exclusive harbourside suburb that often goes under the tourist radar, but it is worth booking Sydney accommodation to visit because of its gorgeous harbourside boating villages. The team here at The Savoy Hotel in Double bay have compiled this article describing the basics on Double Bay, for your information.

How did Double Bay get its name?

The locality was formerly known as Keltie Cove, named after the master of HMS Sirius. It served as a shelter for fishermen who frequently fished around the harbour during the colony’s early years.

Its current name was first used in 1821. Double Bay was named as such because of the sandy shoreline stopped by a miniature point. It pertains to the two formations between Darling Point and Point Piper that have a miniature point in the middle.

Gov. Lachlan Macquarie marked the bay as the location for the future Botanical Gardens. The gardens were conceptualised and laid out before Macquarie left Sydney. Unfortunately, his successor, Sir Thomas Makdougall Brisbane, did not finish the project.

By 1814, it covered the valleys leading into the area presently known as Bondi Junction, Woollahra, Point Piper, and Bellevue Hill. Then, in October 1834, Major Thomas Mitchell proposed to transform the area into a village composed of 31 lots.

The land was sold through an auction in 1835. At that point, Double Bay only had five streets: Lillian, Swamp, Cross, Bay, and Ocean. It was marketed as a village built for families involved in maritime activities such as fishermen and shipbuilders. For decades, Double Bay was just a neglected, sleepy backwater. It was not until the end of World War II that Double Bay turned into the exclusive location that it is today.

What makes Double Bay so special?

Double Bay is known as one of the most expensive and fashionable shopping districts in Australia. Deemed by many as Sydney’s “Little Europe”, there is no shortage of high fashion boutiques, vibrant cafes, grandiose residential homes, and elegant streets here.

The area has moderate summer temperatures. It can go as high as 40 °c, while the lowest temperature during this time is around 17 °c. On the other hand, temperatures are mild during winter. The highest is 17 °c and can go as low as 7 °c.

Is it easy to get to Double Bay?

There are 6 ways to go to Double Bay from Sydney by ferry, bus, taxi, train, or foot:

Here are the companies that operate services between Sydney and Double Bay:

Although the travel time is relatively short and fares are cheap, it is always best to book accessible, comfortable accommodation in Sydney. This way, time and energy is conserved in appreciating the sights and sounds the locality can offer.

Where are the best places to eat in Double Bay?

Double Bay has spectacular water views and mouth-watering food. Book a nearby accommodation in Sydney to rest in after trying these top-tier restaurants.

Pink Salt is a rustic-chic bar and restaurant adorned with items from all over the world. Their outdoor space also has several plants and greenery. They offer contemporary Australian dishes with a Mediterranean influence.

Dish Pizza and Gelato serves award-winning pizzas and homemade gelato that are still budget friendly. They were voted as one of the top pizza restaurants in Sydney. They also offer modern Italian dishes.

Redleaf Pool Café is one of Sydney’s hidden treasures. A great place for casual lunch, the café is located beside the RedLeaf Pool. Customers get to enjoy the best views in Sydney while eating sandwiches and drinking coffee. There’s also a secluded beach waiting to be explored.

Char & Co is one of the most unique restaurants in Australia. They strive to infuse the “Gaucho” culture into Double Bay with their Southern Brazil-inspired menu. The place has a relaxed and inviting ambience that people will surely enjoy after a long day.

Those who are craving Japanese food will enjoy Niji Restaurant & Bar – they put a twist to their dishes by using Western ingredients to their dishes. The wood ceiling is designed to look like a traditional Japanese restaurant so customers will feel like they are visiting Japan. They also have an outdoor seating area and sushi bar.

Those who prefer to stay in at their Sydney accommodation will likewise find a number of good options for take-aways. For instance, you can buy fresh produce from the market in Guilfoyle Park every Thursday to cook your own delicious meals.

Enjoy your vacation in Double Bay with excellent Sydney accommodation

Are you in search of Sydney accommodation in Double Bay? The Savoy Hotel makes you easily access the greatest sights in Sydney and its nearby areas. Our location offers the following advantages:

Great location, beautiful rooms, and secure area – what more can you ask for? Book your Sydney accommodation at The Savoy Hotel in Double Bay. Call us on 02 9326 1411 or email us your enquiries at info@savoyhotel.com.au. Alternatively, please click here to make an online reservation.